Zero to Valorant: Take Your First Game to the Next Level

The Game: Last Team Standing!
The Spike
The Map: Design
The Map: Whitebox
The Abilities
The Weapons
The Shop

Zero to Valorant: Take Your First Game to the Next Level The Game: Last Team Standing!

Start your fully customized squad shooter project using Core’s Last Team Standing framework! This lesson follows the same format as the Build Your First Game: Deathmatch lesson, so if you have a Deathmatch game already, you can use it for this course and move on to the next lesson.

To get started, use the Create menu to make a new project

The Last Team Standing framework gives you a complete game arena and shooter functionality out of the box, and includes a the rules that players do not respawn until the start of the next round.

Besides player movement, Last Team Standing also gives each player a gun to shoot, and the ability to open and close doors.

Core projects also include multiplayer networking by default. Because this is a crucial component of this game, it is important to test using Multiplayer Preview Mode as much as possible.

You can use Alt + Enter to toggle between fullscreen and windowed mode. You can also use Win + Arrow to dock the screens side by side.

In this next section, you will see different ways to customize the base game, before we add the more complex elements in later lessons. The changes here are inspired by Valorant, but will give you options of ways your game could be made totally differently.

The Last Team Standing Framework and even an empty project all start with the Third Person Camera Settings object. This is a useful place to start when creating a scene, abilities, or objects, but not what this type of game looks like. Fortunately, it is very easy to change to a different type of camera. 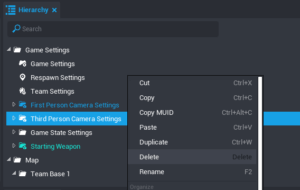 Jumping  is a fun mechanic, but one that is often not part of shooter games. Jumps become an unrealistic way to dodge, and require map designers the spend more time building high barriers and invisible walls. Fortunately for us, this is very easy to disable! 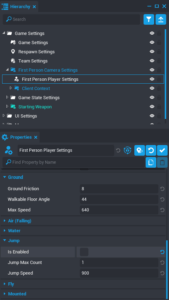 The horses and hoverboards that come with Core are awesome, but don’t fit every game theme, including this one. Disabling mounts is a little more complicated, and will require a line of code. 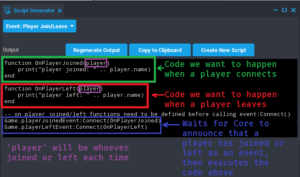 Now that you understand how the script works, you can add the code that will change players as soon as they connect. 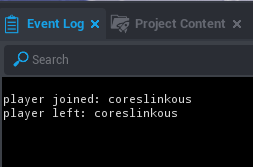 Here is what the PlayJoinLeave  script should look like:

In the rest of this course you will learn how to design a new map and integrate it into the game, as well as adding challenges, like a bomb defusal mission, custom abilities and weapons, and even an in-game currency and shop!

You now have a completely playable, Last Team Standing game. To test it with real human players, publish your game!